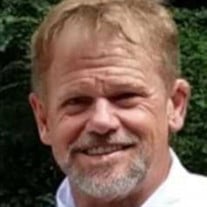 Terry Morgan Hughes, age 63, of Buford, GA passed away Thursday, July 22, 2021. He was preceded in death by his mother, Betty Holcomb Hughes. He is survived by his wife of eight years, Terry Hope Hughes, Buford, GA; children, William “Billy” Hughes, Josie Hughes Norberg and husband Jonathan, Tesha Hughes, Golden, CO; step children, Larkin “Lee” Oliver, Lawrenceville, GA, Rachel and Josh Treadwell, Toccoa, GA; grandchildren, Kristopher Norberg, Aeriel Norberg, Levi Norberg, William Hughes; father, Bill and Donna Hughes, Buford, GA; sisters, Dottie and Robbie Corley, Covington, GA, Teresa and Michael Wilson, Buford, GA; mother-in-law, Helen Lynch, Grayson, GA; and aunts, nieces, nephews, cousins and a host of friends. Terry Hughes was a master carpenter, but experienced in HVAC and many other trades. In recent years he functioned as a general contractor in his capacity as Vice President, Maintenance for Imperial Investments International, Ltd., a property management company, until his retirement several years ago. His mechanical ability enabled him to enjoy his many power and wheeled-vehicles. His love of water found him in varied boats, often fishing in Lake Lanier. He was an airplane pilot and enjoyed playing guitar music. Terry was of the Methodist Faith and friend of Bill W., ministering to others for many decades. His vast knowledge, ability and willingness to help others made him the “go-to” man for any problem. His attention to authentic detail is evident in many historic structures in the Buford Area. He was loved by everyone who knew him and will be missed by all! Funeral services will be held Monday, July 26, 2021 at 2:00 p.m. in the Chapel of Flanigan Funeral Home with Rev. Ron Cansler officiating. Interment will follow at New Prospect United Methodist Church Cemetery in Buford, GA. The family will receive friends prior to the service on Monday from 11:00 a.m. until 2:00 p.m. at the funeral home. Flowers are accepted or donations may be made to your favorite charity in memory of Terry Hughes.

The family of Terry Morgan Hughes created this Life Tributes page to make it easy to share your memories.