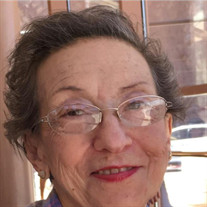 On Saturday, June 27, 2020 our beloved wife, mother, and grandmother Thelma Beatriz Alexander was called home by her Heavenly Father, where she was reunited with her parents who have preceded her in death. At the age of 85 years old, Thelma passed away in the comfort of her home, surrounded by her loved ones. Thelma was born in Buenos Aires, Argentina to Adelia and Juan Manuel DeRosa. Early in life, she earned the nickname of Muñeca (doll) from her parents due to her sweet spirit and beauty. She is the eldest of the DeRosa sisters. Thelma grew up in Buenos Aires, where she fell in love with music and the arts. She was incredibly talented in both painting and music. She completed a piano professorship at the Buenos Aires Conservatory with highest honors. Thelma loved to play the piano and dedicated many years to teaching others how to play and helping them develop their musical talents. Throughout her life, Thelma has been a woman of deep faith and charity. She never passed up an opportunity to help those in need. She was a devoted and caring wife, a loving and nurturing mother, and an unforgettable grandmother. Thelma was full of happiness, those who met her, could feel her sweet spirit and her unconditional love. Thelma first met Albert in Argentina, while he was serving an LDS mission. Years later, after a courtship fit for a Hollywood film, Albert and Thelma were married civilly in Buenos Aires, Argentina. Then, they were sealed for time and all eternity in the Salt Lake City, Utah Temple. Albert and Thelma were blessed with three beautiful children whom they raised and cared for with the utmost love and dedication. Throughout her life, Thelma has enjoyed various opportunities to serve in the Church of Jesus Christ of Latter-Day Saints. She has served in the Young Women’s, Primary, and Relief Society Presidencies, where she uplifted and blessed all those who knew her. Thelma has been true to her knowledge and testimony of the Gospel of Jesus Christ and has exemplified the pure love of Christ. Thelma will be dearly missed and is survived by; her husband Albert Lee Alexander, her three children: Vanesa (Andres) Sarazua, Albert L. Alexander Jr., and John (Melissa) Alexander, her sisters Gloria (Jorge) Duhalde and Susana DeRosa, and eleven grandchildren. A private family viewing will be held at Flanigan Funeral Home. In lieu of flowers, please make charitable donations to your charity of choice

On Saturday, June 27, 2020 our beloved wife, mother, and grandmother Thelma Beatriz Alexander was called home by her Heavenly Father, where she was reunited with her parents who have preceded her in death. At the age of 85 years old, Thelma... View Obituary & Service Information

The family of Thelma B. De Rosa Alexander created this Life Tributes page to make it easy to share your memories.