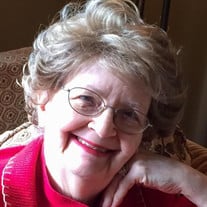 Thelma Beatrice Jenkins Oswald January 12, 1937 – February 2, 2021 Thelma Beatrice Oswald, 84, of Tucker, GA, passed away peacefully on Tuesday, February 2, 2021.Thelma was born in Etterville, Missouri on January 12, 1937. She graduated from Argentine High in Kansas City, Kansas in 1955 at the age of 18. She began working right out of high school for Conoco Oil Company where she met, Lou Oswald, and they were married in 1956 in Kansas City, Kansas. They moved to Des Moines, Iowa and were transferred to Roswell, NM in 1960. In 1969 they moved their growing family to Atlanta, GA where they lived out their days. Thelma was the epitome of the perfect wife & mother, excellent cook & seamstress. She embodied the full meaning of home economics. She was priceless & her husband, Lou, adored her. They enjoyed traveling around the country extensively after Dad’s retirement in 1993. They were happily married for 63 years until Lou’s passing in 2019. Thelma is survived by her son, Nick Oswald and his wife Cathy of Buford, GA; daughters, Tracey Rae and her husband Shawn of Alpharetta, GA; Trudy Blackwell of Tucker, GA and Theresa Ratje of Greenville, SC; and seven grandchildren. Thelma was preceded in death by her husband, Louis Charles Oswald and two grandsons. The service will be held at 11:00 AM, Monday, February 22, 2021 at Holy Cross Catholic Church, 3773 Chamblee Tucker Rd, Atlanta, GA 30341. In lieu of flowers, memorials may be made to the Alzheimer’s Association, Georgia Chapter online at www.alz.org/georgia, in honor of our beloved Mother. Online tributes may be left at www.flaniganfunerlhome.com. Arrangements by Flanigan Funeral Home and Crematory, 440 S. Lee St, Buford, GA 30518, (770) 932-1133.

The family of Thelma Beatrice Jenkins Oswald created this Life Tributes page to make it easy to share your memories.