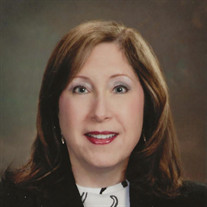 Born April 6, 1960 in Ardmore, OK and raised in southern Oklahoma, Vanessa McIver went to her heavenly home on April 15, 2020 while living in Buford, GA following a courageous battle with cancer. Vanessa graduated as valedictorian of her high school class in Marietta, OK, and pursued a Bachelor of Science in Business Administration from Oklahoma State University. Following graduation from OSU, she became employed in the life insurance industry and was ultimately promoted to Senior Underwriting Consultant. At the age of 35, she packed her car and drove east to Boston, MA to train as a life insurance underwriter. A firm believer in continuing education, Vanessa earned numerous insurance industry designations during her career and enjoyed mentoring other underwriters as they pursued their industry educational goals. Vanessa loved collecting paintings from local artists, as well as traveling across the US, Scotland, England, and Wales. In 1998, Vanessa and a friend from the Scottish Club of Tulsa toured the United Kingdom. While Vanessa dreamed of returning to Scotland, cancer interfered with those dreams. As a McIver, she loved all things Scottish and was a founding member of Clan Donnachaidh (pronounced “donna-key”), Midwest Branch, in the early 1990's. She was the first newsletter editor of the Midwest Branch and named the newsletter The Donnachaidh Difference, which it remains to this day. Always a fan of rodeos, Vanessa became an avid fan of Professional Bull Riding and attended PBR events whenever they came to town. She even made a once in a lifetime trip to the PBR Finals in Las Vegas. Wherever she went, Vanessa had a smile on her face. Vanessa's passion was Square Dancing. A member of Fun Times and Jug Tavern square dance clubs, she danced several nights a week. When asked how she remained happy in the face of adversity, she replied that she trusted in God and she chose happiness. There is a time for everything, and a season for every activity under the heavens (Ecclesiastes 3: 1-8). She was preceded in death by her parents, Jack B. and India Pratt McIver; maternal grandparents, Henry & Hattie Pratt; paternal grandparents, Gerald McIver and Olen and Margaret McIver Walker. The Love of Her Life, Joe Ramirez predeceased Vanessa in March 2017. She is survived by two brothers and sisters-in-law: David and Ann McIver (Brownsburg, IN) and Roger and Liz McIver (Blair, OK); two sisters and brothers-in-law: Laura and David Bennett (Fruita, CO) and Ann and James Greenwood (Marietta, OK); One niece, Angel Greenwood and three nephews: Dillen Greenwood, Stefan Soder, and Kevin McIver. A Memorial Service to celebrate the Life of Vanessa McIver will be held later this summer at Flanigan Funeral Home Buford, GA. Arrangements will be announced. In lieu of flowers, memorials can be made in Vanessa’s memory to either the Sarcoma Alliance (www.sarcomaalliance.org) providing resources and services to people affected by sarcoma or to the Western Sports Foundation (https://www.westernsportsfoundation.org/), a non-profit organization dedicated to enhancing the overall success of western sports athletes.

Born April 6, 1960 in Ardmore, OK and raised in southern Oklahoma, Vanessa McIver went to her heavenly home on April 15, 2020 while living in Buford, GA following a courageous battle with cancer. Vanessa graduated as valedictorian of her high... View Obituary & Service Information

The family of Vanessa McIver created this Life Tributes page to make it easy to share your memories.