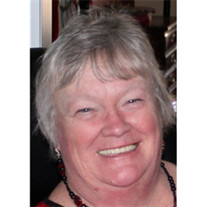 Vicky Jones Chambers, age 57, of Lula, GA passed away on Thursday, January 22, 2015. She was preceded in death by her husband, Benny Chambers. She is survived by her children, Elizabeth Chambers (Mike Hinton) of Lula, GA, Joseph Chambers (Rachel) of Flowery Branch, GA and "adopted" daughter Linda Grizzle of Quitman, LA; four grandchildren; her brother Don Jones of Cleveland, GA; sister-in-law Alma Jean Smith of Cornelia, GA; and other family members. Vicky was born December 22, 1957 in Gainesville, GA. She was a 1974 graduate of East Hall High School, and she drove a bus with Hall County School System for twenty-one years. She followed her passion the past nine years by owning Around the Corner Florist in Lula, GA. She believed that "Where flowers bloom, so does hope." Active in her community with a desire to help others, she served as Mayor Pro Tem for the City of Lula, a member of the Lula Historical Society and of the Downtown Development Authority. Animal rescue, particularly of pugs, and genealogy were also dear to her heart. Vicky described herself and her philosophy saying, "I love to laugh. If I can be remembered for one thing, I hope it will be laughter. Life is too short to stress over what we can't change. Find an alternate route and keep going. Let people you love know you love them. Tomorrow may be too late." The family will receive friends at Flanigan Funeral Home on Friday, January 30, 2015 from 4:00 p.m. until 8:00 p.m. Flowers accepted. A Celebration of Life Service will be held on Saturday, January 31, 2015 at 11:00 a.m. at Hickory Flat United Methodist Church, 3409 GA 51 South, Lula, GA 30554 with Rev. Tilly Welborn officiating.

Vicky Jones Chambers, age 57, of Lula, GA passed away on Thursday, January 22, 2015. She was preceded in death by her husband, Benny Chambers. She is survived by her children, Elizabeth Chambers (Mike Hinton) of Lula, GA, Joseph Chambers (Rachel)... View Obituary & Service Information

The family of Vicky Jones Chambers created this Life Tributes page to make it easy to share your memories.