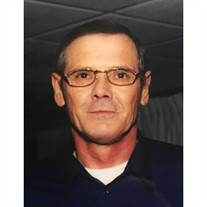 Wayne Arnold Ballew of Sugar Hill, Georgia passed away at his home on Pass Court Monday night May 7, 2018. Mr. Ballew is a lifelong resident of Sugar Hill, Georgia, and a 1967 graduate of North Gwinnett High School. He proudly enlisted in the United States Marine Corps in 1968 and cherished that brotherhood through his entire life. Mr. Ballew is preceded in death by his father, Joe W Ballew and his mother Louise Pass Ballew, a brother Greg Ballew and his beloved wife of 39 years, Melanie Long Ballew. He is survived by his sister, Penny Swansey (Doug), five children; Stacey Ballew, Jody Pritchett, Joey Ballew, Bonnie Neumeister (Michael) and Stephen Ballew. Mr. Ballew is the grandfather of 10 grandsons (Ethan Pruitt, Jonas Bagwell, Dylan Barron, James Bagwell, Joseph Bagwell, Cameron Benson, Maddox Ballew, Spencer Ballew, Eli Ballew & Harvey Neumeister) as well as one granddaughter (Whitney Ballew). They were his pride and joy until his end. He is also survived by a large number of cousins and friends who were with him in life and in the days before his death. He loved them all ferociously. The funeral service will be held on Friday, May 11, 2018 at 2:00 p.m. in the Chapel of Flanigan Funeral Home with Rev. Chuck Allen officiating. Interment with military honors will follow at Broadlawn Memorial Gardens in Buford, GA. The family will receive friends on Thursday, May 10 from 4:00 p.m. until 8:00 p.m. at the funeral home. In lieu of flowers, the family asks that donations be made in Wayne's honor to the Semper Fi Fund @ https://semperfifund.org/donate/.

The family of Wayne A. Ballew created this Life Tributes page to make it easy to share your memories.

Wayne Arnold Ballew of Sugar Hill, Georgia passed away at his...