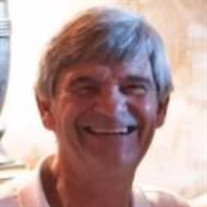 Wayne Lester Kennedy, 74, passed away on Tuesday, December 29, 2020. He was born September 9, 1946 in Thomasville, NC to the late Brown and Ruth Kennedy. He is survived by his wife, Barbara Beach Kennedy, his children Cheryl (Andy), Jeff (Andrea), Brian, Eddie and Bonnie (Kurt). He had nine grandchildren he adored: Abe, Amelia, Charlotte, Audrey, Lyla, Jagger, Edie, Ember and Rain. Wayne was a graduate of Gaston College a with a degree in Civil Engineering. After college he moved to Atlanta and shortly after was drafted. He joined the Army as a surveyor, served a tour in Viet Nam and finished his enlistment as a Drill Sergeant at Fort Sill, OK. He was immensely proud of his military service. Wayne worked as a civil engineer his entire career specializing in various areas including road design, traffic design, environmental, development and engineering, plus many more. He ended his career as County Engineer for Coweta County, Newnan, GA. Wayne had several hobbies that he thoroughly enjoyed: fishing, hunting, four wheeling, biking and golfing. He was a remarkable woodworker and made numerous pieces of furniture and more for family and friends. He enjoyed sharing this talent and would help whenever a woodworking project was needed. He was very active in his community and left his footprints in many places. He was always there to volunteer his time and talents. He was a kind, gentle and passionate individual. He was never afraid to show his true feelings. He was loved by many and will be missed by many. Flanigan Funeral Home is handling the arrangements. Wayne's service will be held in the Georgia National Cemetery at a later date. If you would like to do something in his honor, please send a donation to St. Jude’s, Celebration Church or any charity of your choice.

Wayne Lester Kennedy, 74, passed away on Tuesday, December 29, 2020. He was born September 9, 1946 in Thomasville, NC to the late Brown and Ruth Kennedy. He is survived by his wife, Barbara Beach Kennedy, his children Cheryl (Andy), Jeff (Andrea),... View Obituary & Service Information

The family of Wayne Lester Kennedy created this Life Tributes page to make it easy to share your memories.