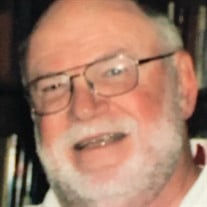 Obituary for William F. Byrd, Jr. William Franklin Byrd, Jr., known as Bill, passed away peacefully during his sleep at his Stone Mountain, Georgia home on February 24, 2021. He was 71 year old. He was preceded in death by his mother Dorothy Byrd, father Rev. William F. Byrd, Sr., and wife Claire Byrd. He is survived by his partner Joy Hortman, son Heath Byrd, sister Alice Burley, and nephews and nieces. Bill had many interests and hobbies. He was an avid amateur (HAM) radio operator who earned his license at age 12. A lifelong angler who specialized in ultralight spin and fly fishing tackle, he holds multiple world records and wrote articles in national periodicals. Other hobbies included SCUBA open water and cave diving, small craft aviation, woodworking, photography, hunting, and gardening. In addition, he loved food more than almost anyone who is not a professional chef. Born in Dallas, GA, he grew up in Atlanta and Buford. In addition to playing multiple sports, he began his career in radio as an afternoon disc jockey and married Claire while still attending Buford High School. He graduated with a B.A. in English from the University of Georgia and forged a career in radio and advertising. He also ran two successful small businesses. Bill had a tough exterior. He had the strength of an ox and, at times, the stubbornness of a mule. But those who knew him understood that his true nature was full of tenderness, reminiscent of a giant teddy bear. His most cherished hobby was visiting and celebrating with family and friends. He loved cooking and grilling for family gatherings, and he made time to keep track of and catch up with those he knew, wearing out many telephones in the process. He tried to help everyone in his orbit to be successful and happy, and he shared others’ delights and sorrows. With his passion for life, enthusiasm, and quirky wit, Bill was truly a unique being. He will be missed by those who were lucky enough to have known him. Due to COVID-19, no memorial service is planned at this time. The family is considering holding an outdoor gathering to celebrate Bill’s life later this year. Information will be communicated directly to family and friends and via social media.

Obituary for William F. Byrd, Jr. William Franklin Byrd, Jr., known as Bill, passed away peacefully during his sleep at his Stone Mountain, Georgia home on February 24, 2021. He was 71 year old. He was preceded in death by his mother Dorothy... View Obituary & Service Information

The family of William Franklin Byrd Jr. created this Life Tributes page to make it easy to share your memories.