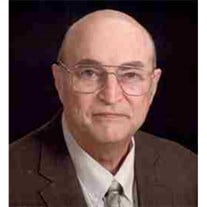 William Earl (Bud) Sears, III, age 67, of Sugar Hill, GA passed away on Sunday, January 20, 2013. He was preceded in death by his son, William Earl (Wes) Sears, IV; parents, William E. (Earl) and Alma Roberts Sears; father-in-law and mother-in-law, Leonard and Hassie Miller; and brother-in-law, Verlon Southerland. He is survived by his wife of forty-six years, Beverly Miller Sears, Sugar Hill, GA; daughters and sons-in-law, Emily Sears Warlick and husband, Dr. Michael D. (Dave) Warlick, Flowery Branch, GA and Susan Sears Sharp and husband, Kevin Sharp, London, England; grandchildren, Jocelyn Elena (Jocey) Sears, William E. (Will) Sears, V, Madison Warlick, Camille Warlick, Olivia Sharp and Georgia Sharp; sisters and brothers-in-law, Sue Southerland, Buford, GA, Elinor and Herbie Wilson, Buford, GA, Lynne and Tommy Davis, Dacula, GA; and several nieces, nephews and cousins. Bud was born in Buford, Georgia and graduated Valedictorian from Buford High School. He earned his Bachelor of Electrical Engineering and Master of Science in Electrical Engineering from Georgia Institute of Technology. Bud started working for Georgia Tech while still a student and continued for a 30-year career retiring as the Director of the Electronic Systems Laboratory at Georgia Tech Research Institute (GTRI). He was one of the early founders of the Peachtree Roost local chapter of the Association of Old Crows. He was instrumental in the growth of Electronic Warfare at GTRI and was a member of the Association of Old Crows Technology Hall of Fame. Bud was an active member at Suwanee United Methodist Church as current teacher of the Ken McDaniel Adult Sunday School Class and past choir director for 33 years. He lived a life of service, completing the UMC License for Pastoral Ministry School and becoming certified as a UMC Men's Ministry Specialist. He was on the Board of Directors for Camp Wesley and was current president of the North Georgia Conference of United Methodist Men. As his children were growing up, Bud enjoyed many years of coaching basketball, softball, and baseball through the Buford area recreation league. Bud was a devoted husband, father, and grandfather who gave generously of his time and talents to all who knew him. He treasured his family and lived every day to the fullest. Funeral services will be held on Thursday, January 24, 2013 at 1:00 p.m. in the Chapel of Flanigan Funeral Home with Rev. Stephen Walters and Rev. Leah Cunningham officiating. Interment will follow at Hillcrest Cemetery in Buford, GA. The family will receive friends at the funeral home on Wednesday from 1:00 p.m. until 4:00 p.m. and from 6:00 p.m. until 9:00 p.m. Flowers are accepted or donations may be made to the Suwanee United Methodist Church, 603 Scales Road, Suwanee, GA 30024 in memory of William Earl (Bud) Sears, III.

The family of William Earl Sears, III created this Life Tributes page to make it easy to share your memories.