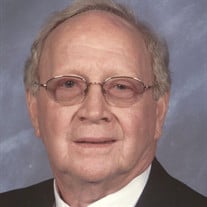 William E. "Bill" Speed passed away Thursday June 10th, 2021 at the age of 85. Born February 4th, 1936 in Selma, Alabama he attended Parrish High School where he met the love of his life, Naida Rowell. They married the same summer after graduating high school together in 1954. Bill attended the University of Alabama earning his Bachelor of Science degree in 1958. Joining the United States Air Force after college and serving one term, Bill was called home to Selma to help his parents with the family business after his father was injured. Years later, he became an insurance agent, then promoted to a management position. This led him to move to the Atlanta area in 1973, moving his wife and 3 sons to Buford, Georgia. During this time, Bill was one of the founding members of the new Catholic Church in Buford and became heavily involved in the growth and the building of the church. He loved his church so much that he felt he was called to serve after retirement. Bill was ordained a Deacon in the church in 2000 and served our Lord for many years. After Naida passed away in February of this year, he was soon to follow. Bill and Naida were married for 66 years and the void in his heart was just too deep and empty to carry on. For those who knew Bill, he was a true leader and exemplified the love for our God. Bill was preceded in death by his spouse, Naida Rowell Speed, his son, Mark Speed, his parents, Benjamin Speed and Lynne Mae Speed. Bill is survived by sons and their wives, Brian and Marla Osburn Speed, Keith and Lynne Shomake Speed; seven grandchildren, Jessica Thrasher (Kyle), Kali Arcega (Josh), Shea Speed (Brittny), Leah Speed, Kacie Waters (John), Ryan Speed (Sarah), Anna Chelena (Jonathan), and seven great grandchildren. Bill’s influence and personality will be greatly missed. Funeral Mass will be Friday June 25th, 2021, 11:30 AM at Prince of Peace Catholic Church, Flowery Branch, GA. Reception at Church to follow afterward. Visitation Thursday evening, June 24 at Flanigan Funeral Home in Buford, GA from 5:00 PM to 8:00 PM. In lieu of flowers, please donate to the “Deacon Bill Speed Alter Server Scholarship Fund.” Checks can be made payable to Prince of Peace Catholic Church, and please notate for the scholarship fund. These can be mailed to the address of 6439 Spout Springs Rd, Flowery Branch, GA 30542.

William E. "Bill" Speed passed away Thursday June 10th, 2021 at the age of 85. Born February 4th, 1936 in Selma, Alabama he attended Parrish High School where he met the love of his life, Naida Rowell. They married the same summer after graduating... View Obituary & Service Information

The family of William E. Speed created this Life Tributes page to make it easy to share your memories.